Creating With A Higher Power

“It is not my job to judge whether my art (aka. Quilting and needlework) is good or not. My job is to exercise my craft and to take marching orders when I get them.”

I have learned that when I sit cross legged on my meditation cushion in silence in the mornings, or have a chat with my guardian angels before I go to bed, I make better quilts. I get ideas. Ideas that feel scary and authentic and exciting. When this happens, my first thought is usually that nobody else will understand what I am making. “Nobody could possibly like this. People will not see this as beautiful.”

I talk myself out of most of these ideas almost as soon as I get them and instead of diving into them and committing to them, I chicken out on them. I do something that is nice and sensible instead. Something I judge to be saleable. After all, I am an artist trying to make a living right?

A little over two years ago I ripped my Achilles tendon taking a squash lesson. I had surgery. A graft was put in from a donor. 3 weeks went by. The seemingly healed wound suddenly split open and the tendon, sutures, and graft came poking through the back of my ankle. The surgeon closed it again. This time with large stitches. They ripped through my skin a few days later.  It hurt. The hole grew gradually bigger. Liquid leaked out. It started to smell. My surgeon said, let’s wait and see what happens. Then he changed his mind and told me he would find me a plastic surgeon who would fix this in no time with a graft of skin from my thigh. He dropped the ball on finding a plastic surgeon. I waited for several weeks.  The hole in my leg grew bigger.

Finally I was referred to an plastic surgeon who specialized in wound healing and reconstruction. He was the kind of old fashioned guy who has practiced medicine for ever and can pull teeth, do breast implants, and reconstruct hands. All without blinking.

He opened my wound in his office with no anestesia. It didn’t hurt. The tissues were necrotic. Dead meat. I was hospitalized and it took three surgeries to debride the wound. It was a dark time for me during those months.  But during the long hours I spent laying on my back, or sitting with my leg up, I felt completely tapped into some spiritual reservoir I had only skirted on the edges of before.

Maybe it was the painkillers? I think not.I think it was the long hours of doing absolutely nothing that sensitized me to the divinity around us. Beings or energies that are open to communicate through us and collaborate with us as productive channels for bringing beauty into the world.

I meditated. I journaled. I played with my divinity cards. The practice started before I went to the hospital and continued at home when I got out.

One night, with my husband snoring next to me, I called on all the angels. There are books written about which angel does what for us, but I can never remember which is which and I can’t imagine it is all that important anyways. In my prayer, I asked for help from them to get me through this difficult time. I pulled them closer in my mind until I was sure I could feel the physical presence of several benign beings next to my bed…and then I fell asleep.

A few hours later a vivid dream woke me up. An angel that looked like a man with wings was standing next to my bed holding a quilt up for me to see. It was the same big black-on-black quilt top I had made a couple of years earlier and stuffed into a cabinet in my sewing room where projects go to die. In the dream the quilt was finished. In large white stitches the words “Wisdom, Hope, Serenity” was stitched across the surface. The quilt was densely hand-quilted in big stitches – Katha style. Red, purple and orange sections of stitching running vertically down its surface.

I got up the next morning, maneuvered on my crutches around in my office until I found the abandoned quilt top. Used chalk to draw the words that had been shown me in the dream.  Then I outlined the words in large running stitches like my visitor had shown me.

This is where the voice (what Steven Pressfield would undoubtedly call the Resistance) came to visit:

“This quilt has no purpose” the voice said. “Your stitches aren’t the same length.”

I finished the words anyways. But then the time came to do the quilting and it just seemed so overwhelming. The quilt I had been shown was almost completely covered in quilting stitches.

“This will never make you any money and is a terrible career move.” The voice said.

I tried to figure out if I could quilt in on the machine.

“You know, this isn’t really publishable work.” Reasoned the voice. “You will spend weeks on this project and it will never really do anything useful”.

I lost momentum. In the end, after a few failed attempts at figuring out how to manifest the quilt that had been shown me without spending the rest of my life hand quilting it, I stuffed if far away. I told myself I would finish it one day. For two years the project hung over a stair railing, basted but abandoned.

For the last year I have been feeling stuck, creatively. All the projects I dream up are utilitarian and pragmatic. Nice, but they aren’t creations from my soul.

I have inspired moments. Moments where I can see what I am supposed to do, but I talk myself out of them, usually by reasoning that I need to finish one of the less inspired projects that are already under way.

The result: my family are all sleeping under new utility quilts. They are quite nice. I am pleased with the color choices.  They are authentically my taste but they aren’t pushing any boundaries. Though not generic, I am not creating from that point that I can sometimes find where I am channeling something special.

This last week has been healing. I have finally gotten so frustrated with the lack of vision and inspiration in what I am creating that I can no longer stand it. This is the turning point. The point where I can see that I absolutely HAVE to change what I am doing.  It is time to find some silence and momentum again to stop shutting out everything that is truly inspired, authentic, difficult, unconventional, and interesting.

I can see that I am acting from fear. Fear of being vulnerable. Fear of spending a ton of time on something too uncommercial. Fear of having to explain to my husband, who rightly thinks I am trying to build a quilting business, that I am making totally one-of-a-kind projects that I have no plan to making patterns for. Fear of being judged as a being too “out-there”.  (Heck, I just admitted to you that I believe I get inspiration from angles and other divine powers. That is about the scariest thing I have done since dropping out of grad-school.)

The truth is that I do my best work, have my best ideas, am the most productive, when I take time in the morning to light a candle. To sit, cross legged on my safu in my sewing room for a few minutes just listening to the sounds inside me and to the energies flowing around me.

I need to take time to be still, so that the little voice inside me, the muse on my right, and the angel whispering from above, can all be heard and that their voices can be manifested in my work. 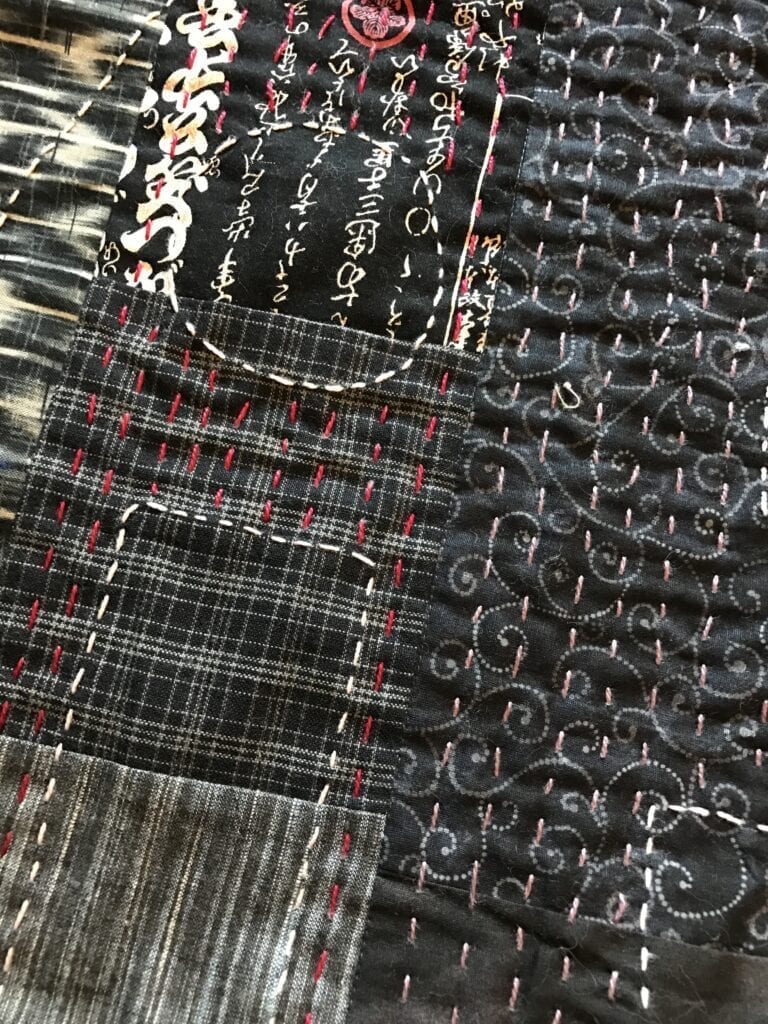 This past week I pulled the “Wisdom, Hope, Serenity” quilt back out of the closet. It needs to be finished. How can I expect to receive inspiration and to channel anything beautiful and interesting when I blatantly drop the ball on the higher power that bestowed the idea on me?

I also made another set of promises to myself. Here they are:

I think that was all for today. Now I have some work to do!

0
Enjoy 10% on orders over $30. USE promo code SAVE10.
Get my deal
This is default text for notification bar
Learn more